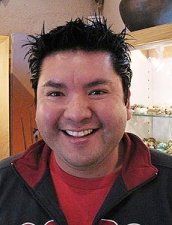 Born at Zuni Pueblo, Alan E. Lasiloo moved to Santa Fe to attend the Institute of American Indian Arts.  He took pottery classes there, learning to work with the shiny micaceous clay of Northern New Mexico honing his skills in those class sessions.  He continued his education at the American College for the Applied Arts in Los Angeles where he studied fashion design.  “I try to utilize what I have learned about fashion design by using lines, curves and pleats in my clay sculptures.  This creates movement and brings life to the pieces.”  He returned home to Zuni Pueblo in 1999, where he began utilizing his education as he taught himself pottery making incorporating the white clay of Zuni Pueblo that he remembered his grandmother using when she was alive.  He first entered his work to be judged at Santa Fe’s Indian Market in 2007.  By incorporating principles of fashion design, while testing form and firing techniques, Lasiloo began producing beautiful award winning pottery. Lasiloo has garnered many awards and accolades making him an artist whose work is sought after by many collectors.

In Lasiloo’s skilled hands, the white clay of the Zuni Pueblo takes on a whole new look. In his early efforts, he made many “mistakes,” but Lasiloo worked with the results, transforming what some would consider errors into beautiful features of his designs.  One of his innovations has given his white clay works a tactile, silky sheen.  Other innovations involve firing techniques.  For instance, he has found a way to enhance streaking, transforming a common firing mistake into an appealing part of his designs.  He also continues to make micaceous clay pieces.  These emphasize painted images, despite the difficulty of painting on the porous micaceous clay.  Lasiloo says the images require six or more costs of paint and a steady hand.