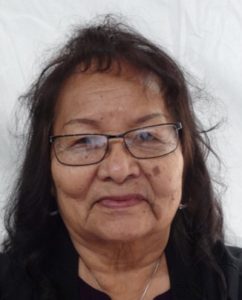 Born at Cow Springs on the Navajo reservation, Alice Cling adheres to the traditional pottery making methods shared by several of the pueblos. She digs local clay, treats it with water to remove impurities, and then mixes it with a tempering agent to make it strong. For the Navajo, tempering agents may be either old pottery sherds or basalt. She uses the coil method to create her beautiful pottery. By continuing to press and scrape the sides of the pot, she can achieve the thin walls that are characteristic of her beautiful pottery.  Alice fires outdoors, the traditional way. Afterwards the pieces are left out in the sun to dry even further. The final step is coating the vessel with piñon pitch. One last step Alice uses is to highly burnish each piece to a lustrous shine, rather than leaving an unpolished thick coat of pitch, as most other potters do.

Simplicity of form and a soft surface sheen are the hallmarks of her work.  She began to learn pottery making when she returned to Shonto after graduating from high school. She learned how to make pottery from her mother, Rose Williams. After graduating from an Indian school, Alice married Jerry Cling. They have four children who make pottery now, too. The family digs the brown-firing clay from a special place near Black Mesa. Alice’s particularly unusual aesthetic contribution to the Navajo pottery renaissance is the magnificent coloration she achieves on the softly burnished and lightly pitch-coated surfaces of her forms.

Alice says that these elegant, gracefully austere forms did not come to her easily. Her first pots twenty years ago were “so ugly” that she vowed to keep shaping and polishing her clay “until it was beautiful.” She applies an iron bearing slip to the finished dry clay form and polishes the surface with a river washed stone or a Popsicle stick. She says that some women use corncobs to burnish. The chemistry of the clay body and the clay slip, the atmosphere in the fire, and the ash that falls onto the pots from the juniper wood combine to produce the red-orange-purple-brown-black blushes that enhance the unusual veneer of Alice’s pots. Through trial and error, she has developed her own techniques, allowing the beautiful pigmentation to serve as the decoration, thus forging an original path for the works she creates.

Alice Cling is a well-known Navajo potter from the Four Corners area in Arizona on the Navajo reservation. Alice’s pottery pieces are vibrant, creative, and bring to life the beauty of the Navajo land. In Flagstaff and Santa Fe at Market, and Indian Fairs, and other Pow Wows, Alice has won many awards for her traditional Navajo pottery.  She has even been honored to have her pieces featured in the White House.