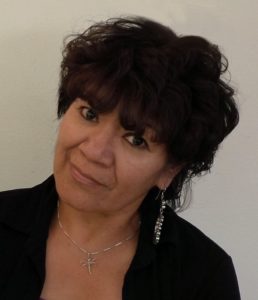 Angie Yazzie is known for her egg-shell thin pieces with beautiful shapes, which are among the best micaceous pottery being made today.  Micaceous pottery has a special glow due to the mica that naturally occurs in the Northern New Mexico clay.  Mica helps hold liquids when clay vessels are used for cooking. The pots are hand constructed using rolled clay coil. Firing is done in an outside pit with dry cedar wood or bark. Each piece has its own unique design of darker fire clouds from the firing.

She is a third generation potter from Taos Pueblo. Her parents were Mary A. Archuleta of Taos Pueblo and Nick Yazzie of the Navajo Nation. In keeping with Pueblo tradition Angie was raised at Taos Pueblo.

Angie tells us she began making pottery when she was nine years old after being introduced to the basics by her mother and her maternal grandmother, Isabel Archuleta. Angie said she lived with her maternal grandparents for several years as a child and through them and their shop at the pueblo, she was exposed to the whole range of Pueblo arts and crafts. Clay Mother, though, is who Angie has heard calling her to work all these years. She took what she learned and developed her own skills and signature style. She is known for her elegant handcrafted micaceous clay vessels that feature extremely fine, thin walls. She digs her own clay at Taos Pueblo and each piece she creates tells a unique story

After learning the barest basics, Angie struck out on her own and learned to make large golden and black micaceous ollas, like the ollas Taos was famous for making a hundred and more years ago. Micaceous clay has tiny flecks of mica spread throughout the clay. That mica makes it possible for a pueblo pot to hold liquids for cooking or storing. There are two seams of micaceous clay on the lands of Taos Pueblo: one golden and one black.