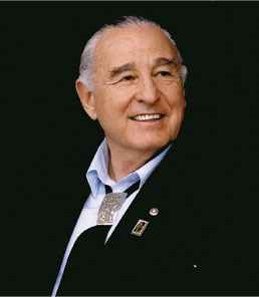 “My father taught me how to use a few tools, but design cannot be taught.”
– Ben Nighthorse

Northern Cheyenne artist, Ben Nighthorse Campbell has led a multi-faceted life. Not only is he considered one of the most successful and innovative artists of today, he also served as the first Native American Senator in the US Senate.

He dropped out of high school to join the Air Force, and served in Korea.  After his tour of duty, Ben attended San Jose State University and earned degrees in Physical Education and Fine Arts. He went to Japan to study judo and jewelry making techniques and continued to develop his skills.  In Japan, he learned techniques for laminating metals from a Samurai sword maker. These techniques can be seen in his exquisite jewelry work today.

Ben’s commitment to using the finest precious and semi-precious gemstones, 18 karat gold and sterling silver exemplify his dedication to the highest standards. Throughout his life, Campbell has made jewelry. Today he works as a political consultant and as a jewelry maker. Ben Nighthorse’s extraordinary talent graces the arms and necks of countless individuals and collectors, including Presidents of the United States, and many celebrities and admirers of fine jewelry.