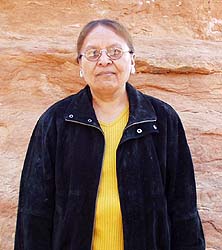 Betty’s art is well known to exhibitors; she has been published; and she is an award winning pottery maker, yet in contrast she leads a simple life in the remote reaches of the Navajo reservation. She rarely attends art shows, she doesn’t speak English, and the most important reason to her for beginning and maintaining her pottery art was to help support her family of nine daughters and one son.

Growing up, she learned to weave and create jewelry, and when she was twenty-five, her grandmother taught her to make functional pottery. Manygoats exaggerates the shape and decoration of traditional Navajo pottery and in the late 1970s first added her trademark horned toads to the surface of the clay.  She taught many of her children to make pottery, and today they create wedding vases, bowls, and jugs decorated with the distinctive horned toads.

Manygoats makes Navajo pottery in the traditional way, just as it has been made for more than one hundred years, but she exaggerates the shapes and modernizes the styling. Although her pots are made in the Navajo Way, Manygoats disregards Navajo taboos on design (in traditional Navajo pottery, only one decorative element—a biyo’, or small beaded necklace just below the rim—is allowed). She puts one or more horned toads, for instance, on almost everything she makes, from the smallest to the largest pieces. Occasionally her pieces include a painted design—also a taboo in the Navajo pottery tradition. Manygoats also makes small animals—buffalo, horses, sheep, and goats—that are similar to the clay toys that the Navajo used to make for their children.

Manygoats uses Navajo clay from Black Mesa, forming it into coils that wind upward. She starts her coils in various-sized bowls and pie tins, which determine the eventual circumference of the piece. Then she smoothes the coiled clay and adds the decorations. (Manygoats makes her horned toad scales with a bobby pin.) After the piece has dried in the sun, it is placed in an open-pit kiln and covered with cow dung. Cedar is the preferred fuel for the kiln. Where the wood ash comes in contact with the clay, brownish gray discolorations called “fire clouds” appear. After firing, warm pinon pitch is applied to the piece, inside and out. Once coated with pitch, the pot is watertight. Manygoat’s ware can be as small as 3 inches high, but some of her pots are very large—close to 3 feet. Her wedding vases, often measuring over 2 feet high, are famous.

The new Navajo pottery is finding its way into the important collection of Native American art and pottery. It is featured in galleries and museums surrounding the Navajo Nation—those in Phoenix and Tucson, Arizona, and in Gallup, Farmington, and Santa Fe, New Mexico. Betty Manygoats soon began winning awards for her work at the annual Navajo exhibitions held at the Museum of Northern Arizona in Flagstaff, and at the Inter-Tribal Indian Ceremony in Gallup, New Mexico. She never, however, personally appears at this type of event.