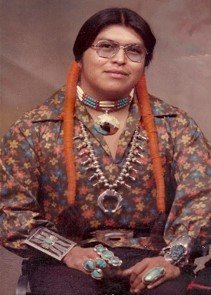 Carlos Dunlap, Jr. was the son of Carmelita Dunlap, a niece of Maria Martinez and a very noted potter from San Ildefonso. Carlos soaring career was tragically cut short by his death in 1981 from an auto accident.  He began is pottery career at a very early age painting pieces for his mother, as well as creating his own beautiful pottery.  Carlos was considered an excellent potter and pottery painter who many believed was destined to follow in Maria’s footsteps. He is known for his large classic polychrome pieces with impressive traditional designs, as well as his black-on-black jars. His painted designs are well balanced and attractive compositions.

He and his mother collaborated on a number of pieces, signing them “Carlos and Carmelita Dunlap San Ildefonso”. Carlos signed his own pieces with his name and pueblo. As acclaimed potters, both mother and son participated in the Santa Fe Indian Market.