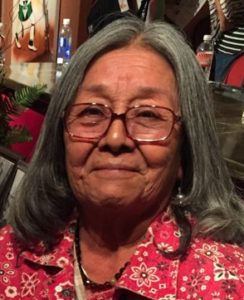 Carmel Lewis  is one of the daughters of the late world renowned, Lucy M. Lewis.  Lucy Lewis had seven daughters and two sons, and Carmel was the youngest. Some collectors know her by her married name, Carmel Lewis Haskaya.

Her mother was Carmel’s biggest inspiration for learning the ancient traditional methods of working with natural handmade pottery. Carmel gathers her clay from the pits within the Acoma Pueblo. She cleans her clay by hand to purify the natural ingredients that mother earth has provided her.  She hand mixes, hand coils, and hand paints her pottery using the ancient traditional outdoor firing techniques.

Her unique hand-painted designs are replicated from tradition symbols found on ancient pottery sherds. She has been an active pottery since 1952 working in Anasazi, Mimbres and Tularosa Revival polychromes, black-on-white, and black-on-orange jars, bowls, seed pots and canteens. The Lewis family keeps the same patterns and does not move to a contemporary style because it is very important to them to keep alive true traditions and designs of the ancient Mimbres people alive. Some of the of these designs are the deer pot, the lightning bolt pattern, the stylized parrots,  and the many variations of the Mimbres patterns.Carmel Lewis is also related to Dolores Lewis-Garcia, Emma Lewis (sisters) and Drew Lewis (brother).

Members of the Lewis family of potters are featured in almost every publication on pueblo pottery, such as Seven Families in Pueblo Pottery, Fourteen Families in Pueblo Pottery, American Indian Pottery 2nd Edition, Talking with the Clay, and Southwestern Pottery, Anasazi to Zuni. They have won numerous awards, including several 1st, 2nd, and 3rd places at the Santa Fe Indian Market on many occasions, the Heard Museum show, New Mexico State fair, and a host of others.