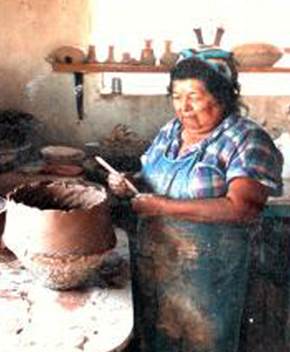 Carmelita Dunlap was the niece of Maria Martinez, who is considered the institution of San Ildefonso pottery. Carmelita learned pottery making by watching her aunts Maria and Desideria Montoya. Since her own mother passed away when she was very young, her aunts raised her from then on.

Carmelita was considered the last living protégé of Maria. San Ildefonso Pueblo is known for its beautiful, highly polished pottery which is formed and finished by hand. Work such as coiling, molding and sanding are very important to the way the pot will look when finished. The designs are then carefully painted on the polished surface, using a mixture of clay and water, which is called a slip. The work is then fired in an outdoor open-air fire pit using wood and manure as fuel. Each artist skillfully paints motifs of nature’s elements in balanced, rhythmic designs onto the polished surface using a yucca brush dipped in clay. Carmelita was known for her beautiful painting on large size pots in black-on-black, cream-on-red, and sunrise brown being, the family’s specialty.