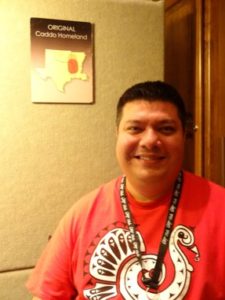 Born in Oklahoma, art has always been a part of Chase’s life.  While in kindergarten, his art teacher asked him to draw something for the school. This simple request sparked a lifelong interest in visual art. From that day forward, he has been always drawing or painting.

After high school, Chase attended Savannah College of Art and Design in Georgia, and graduated with a degree in computer art and animation. His interest in computers turned into a career as a web designer for the Chickasaw Nation.

Chase has always been drawn to the art of pottery. He has long admired the pueblo pottery of the Southwest. It was after meeting Jereldine Redcorn that his interest in pottery turned into a passion for making pottery. Redcorn began reviving the lost tradition of Caddo pottery in the early 1990s after being exposed to ancient pieces in museum collections.   She showed Chase how to make contemporary Caddo pottery the ancient way and how to use the tools, materials and firing methods of hundreds of years ago.  This sparked a passion in Chase to create pottery of the ancient Caddo. He had found his calling.

Traditionally Caddo pottery was made by hand, using locally available materials. The completed vessels were wood-fired in a pit (not a kiln) at relatively low temperatures.  Before the clay was formed into shape, it was tempered with natural additives to keep it from shrinking and cracking during the drying and firing process. It was burnished by rubbing each piece with river rocks to achieve the high glossy shine.

On any given day, Chase will be walking the river banks of the White, Washita, and Red rivers of Oklahoma always on the hunt for local clay, harvesting and processing it to create exquisitely crafted pottery inspired by ancient forms.  Five hundred years ago, his Caddo ancestors produced some of the most striking pottery in prehistoric North America.  All of these pieces were created by the coiling technique and many were engraved with organic designs derived from Caddo myth and legend.

Chase says that his “contemporary Caddo pottery is born of inspiration from my Native tribe’s ancient and unique heritage.  It is their legacy that I wish to keep alive by interpreting our ancient designs and symbols in a new and modern way using the methods and materials of our time.”

His work has earned him numerous awards and ribbons. He won First Place at the 2013 Santa Fe Indian Market, Santa Fe, New Mexico; Best of Show at the 2015 Cahokia Mounds Contemporary Art Show, Collinsville, Illinois; Best of Division at the 2014 Cherokee Art Market, Catoosa, Oklahoma; Best of Show at the 2014 Red Earth Festival in Oklahoma City, Oklahoma. Most recently he won 2016 Best of Class at the Cherokee Art Market in Tulsa.  His pottery is included in museums and galleries throughout the United States.

Adapted from information on http://caddopottery.com