(1965 – Present)
Tribal Affiliation: Sokoki Band of the  Abenaki Nation of the Missisquoi

“That’s where the fun is – digging in the ground.” 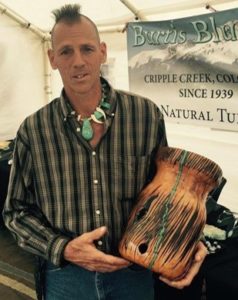 A member of the Sokoki Band of the Missiquoi Abenaki Nation, sometimes referred to as the North Eastern Abenaki, Clint Cross has a mining and gem cutting background. Clint has been prospecting and mining for over 21 years and has been managing and mining at the Burtis Blue Mine for over four years.

He grew up in St. Albans Vermont where he learned about the mining process. Mining would eventually become not only his career, but his passion. Clint and his family now call Colorado home. Clint manages the Burtis Blue Mine near Cripple Creek, Colorado, which is the oldest running family owned, commercially viable turquoise mine remaining in Colorado. The Burtis Blue is also known as the Florence Mine. The turquoise from this mine is a beautiful natural color with a soft brown matrix.  This gorgeous turquoise comes in a variety of blues and greens and can match almost all other turquoise mines in the world. The mining here is all done carefully by hand and the turquoise produced from this mine is of the highest gem quality.

When Clint is not mining turquoise, he is busy making beautiful jewelry and artifacts using all natural turquoise cabochons and crushed bits from the Burtis Blue Mine. The jewelry he makes incorporates the beautiful natural turquoise from the mine. Clint also makes inlaid furniture, vases and other accessories. His art is always one of a kind and all hand crafted.

As one of the Nation’s First People, Clint has a strong affinity for turquoise stones. He loves working with the natural turquoise and believes in the spiritually of this beautiful gemstone. He says, “Turquoise is considered to be a giving colored gemstone. It is given to us by the Great Spirit. Turquoise has brought peace among the indigenous people of America through trade. It is considered to be a healing stone, it is called “the sky stone”, and is a protector.” Turquoise is also known as the December stone.