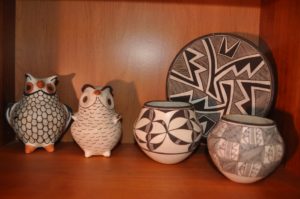 The rich differences that attract more seasoned collectors of pottery can be overwhelming to someone looking at Indian pottery for the first time. By understanding reasons for the variety in pottery, a person may be better able to understand that there is no easy formula to selecting one piece over another–and it is perfectly all right simply to buy what you like.

Several factors contribute to the diversity of Native American pottery. These can be lumped into three basic categories: materials, traditions, and innovations.

The makers of traditional pottery tend to use materials local to their own Pueblo. Acoma is known for its white clay and slip; Zia is recognized for red clay; Hopi for yellow ware; etc. The use of local materials greatly increases the amount of time required to make a pot. The Pueblo potter does not go to the store to buy prepared clay, tempering material, glaze, or paint. The potter must go to the source to dig the clay from the ground. Time is also spent gathering the tempering, slip, and paint materials. Even fuel for the fire must be gathered and dried. Impurities are removed by hand before the clay can be ground on a metate (stone). Paints are also prepared by hand by grinding rocks or clays that produce different colors or boiling plants to produce black carbon paint.

Pueblo traditions also contribute to the variety. While each village has its own tradition concerning what a pot should look like, the pottery from pueblos that use essentially the same materials and techniques can look quite different. Potters from San Ildefonso usually use matte paint on a highly polished background, while Santa Clara potters often carve a design into the surface of the pot, giving a bas relief effect. Cochiti and Santo Domingo potters use a black carbon paint which requires a special slip material that prevents the use of fine lines in the decoration. Furthermore, Santo Domingo potters are not permitted to use certain designs with religious meanings on their pottery, while Cochiti potters have fewer restrictions.

The final factor that contributes to the variety of Pueblo Indian pottery is individual innovation. It is this factor that makes contemporary pottery such an exciting art form. Artists in virtually every one of the pottery-making Pueblos are reinterpreting traditional forms, creating new styles, or even reviving old ones. Ivan Lewis at Cochiti revived a figural tradition of the 19th century, while his wife Rita added her own interpretation to the 20th Century storyteller. (The storyteller is a seated adult figure with two or more children. The adult’s mouth is usually open, telling a story.) The work of some potters is strongly influenced by more than one culture.

Once some of the reasons for the extensive variety of southwestern Indian pottery are understood, acquiring a collection or a single pot will be less intimidating . . . and the pottery can be enjoyed for that very quality of diversity. You will also feel more comfortable in making decisions as to what to buy. One of the greatest joys of collecting is finding the passion. And that passion should be involved even if the collection will never consist of more than one or three pieces.

Adapted from an article appearing in The Collector’s Guide to Santa Fe and Taos by Robert F. Nichols, authority and collector of Indian Pueblo pottery and owner of the Robert Nichols Gallery in Santa Fe.