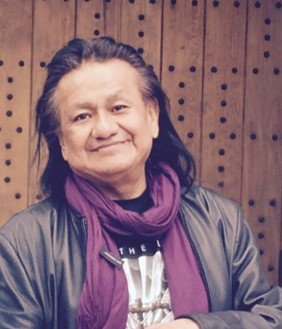 As a Hopi artist of the Water Clan, David says he “would like to be thought of as a painter of mythical or spiritual subjects.” His magnificent paintings are distinguished by his use of jewel-like colors and Hopi symbolism.

David Dawangyumptewa’s path to becoming an artist included stints as a stonemason, and lighting roadie for Jackson Brown and Linda Ronstadt. Raised on the Hopi  reservation, Dawangyumptewa attended many schools including the Institute of American Indian Arts, Haskell Institute in Kansas, and Northern Arizona University. His art has been recognized with awards at the Museum of Northern Arizona, American Indian Heritage Foundation, and Santa Fe and Colorado Indian markets. While promoting his own art in museums and galleries around the country, Dawangyumptewa has expended great effort to bring art to the public via museum exhibit design, the founding of Flagstaff’s Festival of Arts, and high-profile arts advocacy throughout the state of Arizona.

The style and content of Dawangyumptewa’s work is reflective of his Hopi background and Water Clan affiliation.  His work is abstracted variations on traditional water symbols, frogs, dragonflies, and turtles and almost always contains figures interacting with animals.

Dawangyumptewa had a stroke – one that sent him into a coma and damaged his right side. Although he could not hold a brush, a pen, or pencil, Dawangyumptewa woke up to the burning clear realization that he wanted to continue to be an artist. After being right-handed all his life, he picked up his pen in his left hand and began to teach himself how to do his careful, detailed, precise art with his left hand. “I wanted my old life back,” he told me, “but I couldn’t have it, so I created a new life.” And so he did.

Adapted from Quinn McDonald and others.