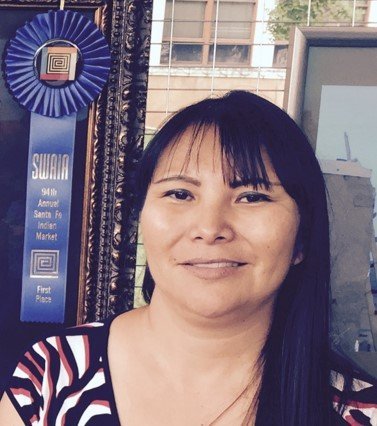 Debbie developed an early interest in photography when her father gave her a Minolta camera when she was a teenager. She never dreamed that her hobby would turn into her life’s passion. Her primary subject is her home of Taos Pueblo. Her aim is to showcase the subtitles and contrasts of the architecture of Taos Pueblo, in addition to providing a tribal member’s unique view of the distinctive historical landmark. She does not use any editing processes to obtain the vivid colors in her photos. Her photography is all natural color and light.

As Ms. Lujan says, “If one cannot come to the pueblo, I can bring the pueblo to the world through my photographs

Her award winning photography is found in private collections throughout the world, and in several museums and galleries of the Southwest. She has shown her work at the Heard Museum Guild Indian Fair and Market in Phoenix, and the Autry Museum American Indian Marketplace in Los Angles. Debbie won First Place in the Photography Division at Santa Fe Indian Market 2015.

Ms. Lujan owns and operates Summer Rain Arts in her ancestral home in the historic Taos Pueblo. Debbie is also an accomplished violinist who plays in two regional symphonies and is a co-coordinator of the Annual Taos Pueblo POW WOW.

All of Debbie’s photographs from The Dancing Rabbit Gallery are framed, under Museum glass, and with acid free mats if matting is used.