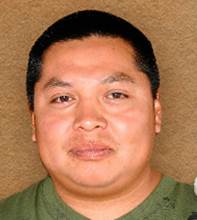 Dee Edaakie carves in a new and innovative style making expressive and whimsical fetishes of bears, mountain lions, and badgers among other creatures. Dee was influenced by his uncle, Gibbs Otole, and several other carvers at Zuni.  He began his carving career by sanding rough fetishes in his uncle’s studio; prior to that Dee studied painting using pencils and watercolors to create landscapes and animals. It was this beginning, along with his avid interest in hunting, which helps him as he shapes each animal for carving. Dee told me that it was during his first show in California that he became “hooked on carving fetishes.” Dee’s stone selection and his fetish carvings appeal to young and older carvers alike.