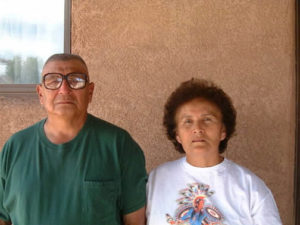 The Gutierrez’s are a husband and wife team that specializes in Native American Indian figurative pottery. Paul “White Corn” Gutierrez and Dorothy “Corn Maiden” Gutierrez are both full blooded Native American Indians; Paul was born in 1940 into the Santa Clara-Tewa Pueblo and Dorothy was born in 1940 as well. Paul is from a family of well-known potters, the grandson of Lela and Van Gutierrez and the son of Luther Gutierrez, (of Margaret & Luther), all of the Santa Clara Pueblo. Paul and Dorothy have been married since 1965, and have two sons, Paul Gutierrez Jr. and Gary Gutierrez.

Paul and Dorothy work as a team, with Dorothy forming the figures and Paul doing the polish and finish work. Every step, from gathering clay to firing outside, follows traditional Santa Clara methods. They gather the clay from within the Santa Clara Pueblo. The clay and sand is prepared by drying, grinding, and sifting before it is mixed with water to produce the medium (weight of clay). The sculptures are then hand pinched, air dried, and fired the traditional way, outdoors, with horse manure. Their redware and blackware Nativity sets contain as many as 17 figures and range from miniature to six inches tall. “They come out different each time, with different faces. It’s nice,” Paul relates.