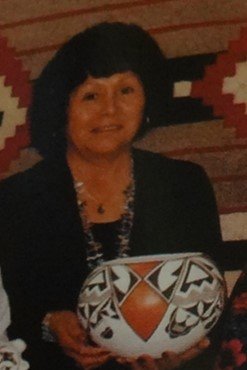 Emma Lewis Mitchell was the daughter of perhaps the most famous of all the Acoma potters- Lucy M. Lewis of Acoma Pueblo. Emma, along with her sisters (Ann Lewis Hansen, Mary Lewis Garcia, Dolores Lewis Garcia and Carmel Lewis Haskaya), learned the art of pottery making from her mother. All daughters became accomplished potters continuing in the footsteps of their mother. Emma began making her beautiful thin walled pottery in 1951.

During her lifetime, Emma conducted numerous demonstrations and workshops on numerous occasions. She preferred to use Mimbres and Anasazi Revival designs in her work. Her pots were made using the traditional methods of her ancestors: she gathered her own clay, collected the natural pigments for her paints, and used a yucca brush to paint her striking designs.  She cleaned her clay for impurities by hand, then, hand mixed, hand coiled, hand painted each piece. Emma used a traditional firing method to add the finishing touch to her wonderful masterpieces, which mother earth has blessed her. Her pieces are the wonderful examples of the thin-walled vessels in black-and-white fine line and in polychrome. Many of her pieces of pottery were made in her kitchen on a small table near her kitchen sink. After grinding and screening her clay outside, Emma would Mix her clay with water for plasticity on her hands and knees, or even with her feet – just as her mother did.

Emma won several awards at the Santa Fe Indian Market and was been exhibited at the Albuquerque Museum an d at the Taipei International Exhibition of Traditional Arts & Crafts, Taipei Fine Arts Museum, Taipei, Taiwan. Her work is included in museum collections around the world, including the Heard Museum, Peabody Museum, Maxwell Museum and Brooklyn Museum of Art.