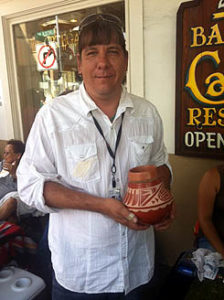 Erik Than Tsideh Fender specializes in traditional and contemporary black ware pottery. He began working with clay at age ten after watching his grandmother, Carmelita Dunlap, and his mother, Martha Appleleaf, as they  would hand coil and hand paint  traditional black -on-black pottery. As he grew older, he started to experiment more with various techniques and clays.  His style progressed from the traditional black-on-black pottery to an innovated two tone, black-on-red, separated by sgraffito low relief carving. He also makes beautiful polychrome pots and presently he specializes in green-on-black pots. He harvests his clumps of raw clay from the sacred grounds within the San Ildefonso Pueblo, then, Erik breaks the clumps of clay to a fine powder substance and mixes it with volcanic ash and water, once that process is complete he hand coils snake like forms and begins to construct his vessel. When the vessel is built it  is set out to dry. Once it has dried he sands it down to smooth out the surface. He stone polishes and hand paints his designs with all natural paints which are all boiled from native   vegetation grown in the Pueblo.

At the age of 17 he won a first place award in the First New Mexico Congressional Art Competition for his pottery, painting and sculpture and he has won awards at the Santa Fe Indian Market. The Congressional Art Competition led Fender to experiment with different clays and techniques to produce new colors on his pottery.  At 22 he apprenticed himself to his mother  to learn the traditional styles and designs of San Ildefonso pottery. Over the years he has won numerous awards at the Eight Northern Pueblos Arts and Crafts Show and again at the Santa  Fe Indian Market.  He signs his pottery as Than Tsideh which means “Sunbird”.

Recently Erik has begun creating beautiful tufa cast jewelry. This process is a labor of love and can be quite tedious for the tufa rock must be very carefully carved in reverse before the liquid silver is poured into the mold. Erik often adds natural turquoise cabochons and or 24k gold to his jewelry. In addition to his stunning unique jewelry, Erik also paints two dimensionally on paper.