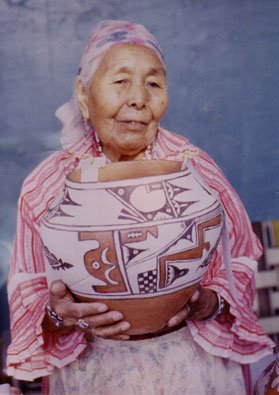 Eudora Montoya is the most well recognized potter from Santa Ana Pueblo and has been credited with keeping the dying art of Santa Ana pottery alive. Montoya learned to make pottery from her mother, but did not really get seriously involved until 1946, when she was in her forties. At that time, there were still a few potters making the old style polychrome pottery; by the early 1970s, she was the only potter left at Santa Ana Pueblo.

Pottery making was never that important at the Santa Ana pueblo. As a farming community, people traded crops for pottery with a neighboring pueblo. Consequently very little Santa Ana pottery was ever made, making it relatively scarce.

In 1972, Dora Montoya and Nancy Winslow (a non-Native American) from Albuquerque began teaching a group of seventeen student potters in an effort to keep Santa Ana style pottery from dying out completely. One of the students was Rachel Medina, who continues to make pottery.

In 1988, Indian Market Magazine honored Eudora Montoya in a feature artist’s profile: “Eudora Montoya is a small, self-effacing woman, but as a bearer of Pueblo Indian culture her contribution has been larger than life. Through her efforts and the knowledge she safeguarded, the centuries-old tradition of Santa Ana-style pottery, once in danger of extinction, remains vitally alive.”