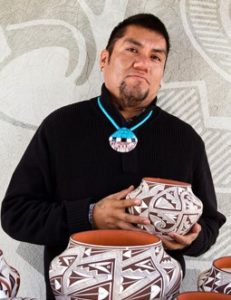 Franklin Peters was born into the Sky Clan (Huwaka) and raised in the Acoma Pueblo.  He is an accomplished potter and is well known for his traditional fine line designs, as well as his parrot designs. He was taught by his mother, Ella Peters, who he counts as his greatest inspiration. Today, he still uses the pigment stones and scraping gourds his mother gave him.

Franklin Peters has emerged as an incredible artist with great attention to detail. He has stated that the “pottery itself is mother-earth…. designs are about the world around us, which have meaning.” His work is characterized by bold slips and colors, sharp lines and traditional Acoma. The thin, fine lines usually found on his pottery symbolize rain. “They’re more praying for rain,” he said of his pots. “As a member of the Sky Clan, that’s what we pray for all the time.”

He’s been producing pots for more than 20 years and has participated in shows at Santa Fe Indian Market, at the Heard Museum in Phoenix and at the Sharlot Museum Indian Market in Prescott. Franklin was selected to demonstrate making traditional Acoma pottery during the 58th Heard Indian Show and Market this past spring.

In 2011 Franklin was selected as the Rollin and Mary Ella King Native Artist Fellow at the School for Advanced Research in Santa Fe. He spent that fellowship studying the Research Center’s pottery collections to better understand the techniques and processes used by his ancestors. He is also interested in increasing the size of his ollas and incorporating more historical designs into his work.