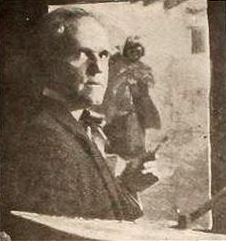 Gerald Ira Diamond Cassidy was born in Covington, Kentucky, he had a successful dual career as both a painter and print maker of Southwest Pueblo Indians.

He grew up in Cincinnati, Ohio, and his early art talent allowed him to be accepted for study with Frank Duveneck at the Cincinnati Art Academy. By age 20, he was director of a lithography (print making) firm in New York City. Because of tuberculosis and a life expectancy of six months, he went to a sanitarium in Albuquerque, New Mexico in 1899, and this venture was his first experience of the West. It was here that he first saw the people and places of the southwest, the subject matter that he would dedicate his entire life’s work to after this point. His first work using Indian and Western subjects was heavily art deco, and a deco edge would remain in his work even as it developed into a more solidly realist style. There he made illustrations in the popular style of Howard Pyle and did drawings of Indians for reproduction on postcards, which earned him his first money in New Mexico.

He regained his health but remained in the West, working in Denver as a successful commercial artist; Cassidy returned to Santa Fe in 1912, becoming a founding member of the Santa Fe Artists’ Colony. He painted the Navajo and other native Americans in works that were primarily transferred to postcards or posters.  In the early 1900s, he settled in Santa Fe, New Mexico, and worked from a studio at the Palace of the Governors.  Cassidy moved to Santa Fe when he was commissioned by Edgar L Hewitt, Director of the School of American Archeology to document the culture of the Pueblo Indians. He was only the third Anglo artist to establish residency in Santa Fe. At this time, he changed his signature from Ira Diamond Cassidy to Gerald Cassidy, and placed the sun symbol of the Tewa Indians between his first and last name.

At the 1915 Panama-California International Exposition in San Diego Cassidy was awarded the gold medal for his murals, the largest award he would win in his lifetime. Then he returned briefly to New York and enrolled at the National Academy of Design and the Art Students League.

Cassidy  also painted many landscapes and large historic murals for commercial buildings including the Indian Arts Building. His wife, Ina Sizer Davis, whom he married in 1912, became a noted author of numerous articles on New Mexico art colonies. During the mid-twenties Cassidy traveled in Europe, and his pieces were well thought of by the European public. (Pablo Picasso chose one of Cassidy’s pieces from a show for inclusion in the Luxembourg Palace in Paris.) From 1913 to 1921, Cassidy was also active as a painter in California. In 1934, while painting a mural for the WPA, Cassidy contracted lead poisoning  and died. It was a terrible, abrupt ending to an artist who had all of the prerequisite skills to become one of the dominant painters of the West in America.