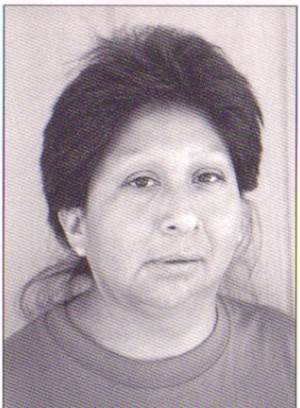 Grace Navasie, the daughter of Joy Navasie (Frog Woman). The Navasie family is one of the premier Hopi pottery families, and has produced a legacy of potters stemming from the original Frog Woman – Paqua.

Joy Navasie has been credited with the development of the white slip pottery style, and as a result, her children have remained faithful. Grace explained that many traditional Hopi motifs include parrot and parrot feather symbols, but many overlook them or mistake them for “rainbird” designs, or even eagle patterns. The beautiful colors are a result of all natural pigments such as the “bee-weed” and hematite mineral. Amazingly, these pigments are still gathered from areas around First Mesa (where pottery originated among the Hopi, and remains alive today).

The processing of these pigments is all done by hand with traditional tools, such as the matate stone, similar to the ones used for early Hopi corn grinding, to process the hematite and “Bee-weed.” Then the details are all added meticulously with the delicate strands of the yucca reed, which has been split into several fine strands, to be used as a brush.

Grace lives at the lower village of Polacca, at First Mesa and continues to adhere to the traditional styles her mother introduced. She can be found featured in several works on the Hopi, including Rick Dillingham’s book Fourteen Families in Pueblo Pottery, and in Lillian Peasser’s book Pueblo Pottery Families.