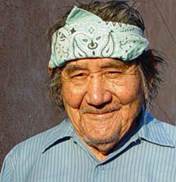 Harrison Begay to his knowledge was born in 1914 approximately fourteen miles west of present-day Greasewood, Arizona on the Diné (Navajo) Reservation at a place known as Whitecone. His date of birth is often cited as a few years later, however, there are no records and Begay preferred the year 1914.

His mother died when he was seven and soon after that he was sent off to government boarding schools. He later decided to study art in Santa Fe where an art school was organized by the government in the early 1930s. Following art school, Begay attended college and then enlisted in the U.S. Army during World War II.  Serving under General Dwight Eisenhower, Begay did not have much opportunity to pursue his painting. Soon after his discharge and return to Arizona he was able to begin once more his study of art. Then in the 1960s he again met General Eisenhower at the annual Ceremonials in Gallup, New Mexico. At that time Harrison presented General Eisenhower with one of his paintings, which is in a permanent collection in Washington, D.C

Harrison Begay, one of the fathers of contemporary Native American Art is renowned worldwide. During the late 1920s, Harrison originated the delicate and fine line style which many modern Native artists utilize in their artwork today.

Harrison has received many prestigious awards and honors throughout his career. Harrison Begay’s interview and portrait was featured by Gary Auberbach during the fall of 2004 in the Smithsonian Institute’s Museum of the American Indian as a living historical figure. Most recently, Harrison was awarded the 2003 Lifetime Achievement Award by the Southwestern Association of Indian Artists (SWAIA), organizers of the annual Santa Fe Indian Art Market.