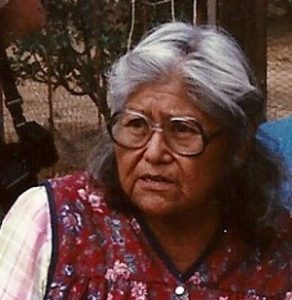 Most Hopi pottery is buff colored or a light yellow cream color. The local clay gathered at Hopi and used by the potters there typically fires to a light yellow cream of buff color. The Navasie family of potters have become highly collectable, not only due to their beautifully formed hand coiled pottery, but also from the white slip which distinguished their pieces from any other Hopi pottery.

Helen Naha, also known as Featherwoman, was the matriarch in a family of well-known Hopi potters. She is the daughter-in-law of Paqua Naha – the first Frog Woman.  Helen was mostly self-taught, following the style of her mother-in-law and sister-in-law, Joy Navasie –the second Frog Woman. Her designs are often based on pre-historic pot sherds found at the Awatovi ruins near Hopi. After collecting the traditional clay of Hopi and making her hand coiled pottery, Helen would polish each piece to a high gloss with stones handed down through the family. Then each piece would be painted with a vegetal and mineral paint applied with a very tiny bristled yucca brush, which may have only one bristle on it. She favored brown-black and red colors applied over the white slip. These beautiful designs became her hallmark style. She would often take the extra step to polish the inside of a piece, as well as the outside.

She signed her pottery with a feather glyph. This resulted in her being called “Feather Woman” by many collectors. Both of her daughters, Sylvia and Rainy, as well as her granddaughter Tyra, are well known potters. She has been recognized by the Southwestern Association for Indian Arts for her body of work through the creation of the Helen Naha Memorial Award – For Excellence in Traditional Hopi Pottery. Today, her medium to larger pots typically sell for several thousand dollars