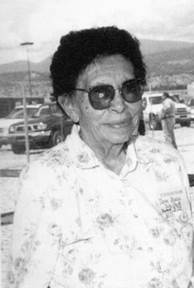 Jane Baca  was born into a family of artists. She had two sisters, Legoria Tafoya and Pablita Velarde. Jane and Legoria were both potters, while Pablita became one of the first female Indian painters.

As a pottery maker, she specialized in figurines. Her animal shaped figures won her and her daughter Starr Tafoya numerous awards. She enjoyed traveling the states to show case their art work. She especially enjoyed Mesa Verde National Park where she and her daughters, Starr and Velma, and granddaughter Povi demonstrated the different stages of pottery making and live firing. Their pottery is currently showcased all over the US.

Jane, affectionately known as “Ma” to her family, raised six children and was the rock of her family.  She lived her entire life in Santa Clara Pueblo. According to numerous accounts, she considered her children her greatest achievements. She loved having the house full of her family and had a laugh that was contagious. Her firsthand accounts of the changing times were incredible and always had us in wanting more. Ma enjoyed watching and feeding all the birds that would come to her window and her guard dog, Baby.