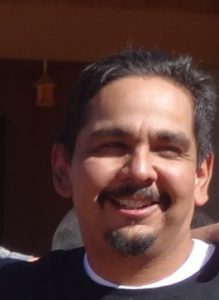 When asked to name the potters in his family, Jason thought about it for a second, then replied “Everyone.”

He is the son of Richard Ebelacker, grandson of Virginia Ebelacker, and great-grandson of the legendary Margaret Tafoya.  Jason’s father, Richard Ebelacker, was an award-winning potter and Jason credits his dad with teaching him everything he needed to know to make pottery in the traditional way. Jason remembers starting to work with clay when he was five and a few years later, he earned a 1st Place ribbon in the Pottery Youth Division of the SWAIA Santa Fe Indian Market. Jason earned two 1st Place ribbons before he was eighteen. He has participated in Indian Market and in the annual Eight Northern Pueblos Arts and Crafts Show regularly ever since. His collection of winning ribbons continues to grow each year.

Jason’s favorite shapes to work with are water jars and cylinders. His favorite design is the avanyu. He says he gets his inspiration from old books and old photos, especially historic books and photos about the Santa Clara people and about northern New Mexico history and archaeology.

As much as Jason obviously enjoys making his pottery, he also is a professional chef and enjoys cooking -especially baking.  He is an avid outdoorsman who enjoys fishing and camping.