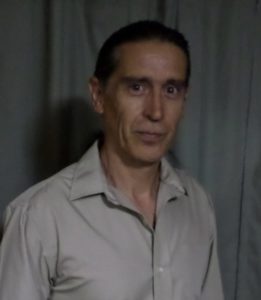 Jeff Roller, as a member of the sixth generation of potters in the Tafoya family from Santa Clara Pueblo, is known for his beautifully crafted and detailed lidded jars, as well as for his bronze sculptures. He learned to make pottery from his mother, Toni Roller, and from his grandmother, famous matriarch Margaret Tafoya.

Growing up in a traditional pueblo family of pottery artists, Jeff began making small figurine and pots as a young child, bringing his pots to shows to sell alongside his mother’s craft.  By his teenage years, he was established as an award-winning potter in his own right.  His statement is eloquent – “I felt more and more captivated by the spiritual nature and lifestyle of working with Mother Clay.”

He is deeply rooted in the traditional Santa Clara pottery styles, and often produces work that hearkens back to the nineteenth century with attached sculpted animal figures on lids, and sculpted animal busts which emerge from various shapes of pots.  His range of vessels is broad, as you might see a small miniature next to a large two-foot tall water jar, all with the same attention to detail and quality that has established Jeff as one of the premier potters of his generation.  His techniques include deep carving, etching, highly polished stone burnishing, and traditional wood burning firing.  His colors include the well known Santa Clara deep black, pure reds, or various shades of brown, depending on the clays and the firing.  The colors are a part of his tradition, with Jeff pointing out that his grandmother Margaret and his great-grandmother Sara Fina experimented with red and brown colors as well as deep black.

Using very traditional methods of making pots is a core element of the Tafoya family practice, and Jeff relates the techniques he has learned directly to the teachings of his mother and grandmother.  He says, “I feel very blessed with the ability to work with the clay as well as obligated to continue making traditional Santa Clara Pueblo pottery, in the honor of my ancestors.”

One can see Jeff’s work in prestigious art galleries around the country such as the National Museum of the American Indian – Smithsonian in Washington D.C, the Philadelphia Art Museum, the Wheelwright Museum in Santa Fe, the Denver Museum of Natural History, and many others.

Jeff has recently moved into an additional medium, bronze sculpture, and his first bronze entries in the Santa Fe Indian Market proved to be blue ribbon winners, launching this extension of his artistic talents into a new, complementary direction.  He says, “I feel as though the sky opened up when learning what I now may be able to create within the bronze medium.”  His passion and creativity, combined with the legacy and training of his family, has propelled Jeff into the forefront of today’s Native American artists.