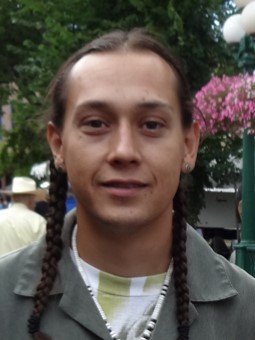 Jordan is a 7th generation potter. He learned from watching his grandmother, Toni Roller, and his father, Jeff Roller, who are award winning potters. His first efforts at making pottery were simple turtles. As Jordan grew, so did his skills at creating beautiful pottery. He is now an award winning potter in his own right and his work features larger and more complex pieces than the turtles he began with long ago.

Influenced by his family traditions and strict adherence to standards of quality, Jordan has near perfect polish on his own beautiful pieces of pottery.  Everything is made from hand gathered clay and fired in traditional manure fires. However, Jordan has his own voice inspired from the nature he sees around him. Cloud forms are a favorite of his. Jordan likes experimenting with slips (red and gold), textures and even asymmetrical forms. The results are an exciting expression of an ancient pueblo art form. Jordan is most known for his use of interesting shapes and designs that maintain a traditional foundation, but are reworked to incorporate his unique style and accentuations.  Above all, Jordan adheres, strictly to traditional methods when creating his pottery.

“Most of my design inspiration came from looking at pictures of my Great-Grandmother’s (pottery matriarch Margaret Tafoya) work. Much of what I use on my pottery still comes from her and her style of designing. One of the most important reasons that I continue to make pottery is a feeling of responsibility to the art form and carrying on what my Great-Grandmother and Grandmother have worked so hard to build and hand down to their children. This is why I continue to use traditional methods and symbolism in my work.”

Adapted from information and comments from Jordan and other sources.