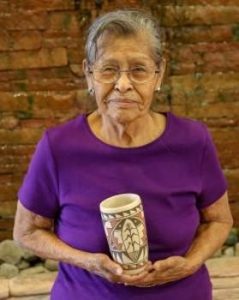 Juanita Fragua, seventh of nine children, is one of the foremost potters responsible for the renaissance of Jemez pottery. She has been making traditional pottery for over 60 years, beginning at a time when sun-dried poster-painted pottery was the norm at Jemez Pueblo. A member of the corn clan, Juanita often uses corn designs on her pottery. Juanita’s pots are painted with soft gray-blues, tans, and chalky whites. She is best known for her melon bowls and wedding vases

Born in 1935, Juanita Fragua grew up at Jemez Pueblo and later attended Santa Fe Indian School. She has been active as a potter since about 1950. She has exhibited her work at the SWAIA Indian Market in Santa Fe since 1982.  Juanita’s three children include acclaimed sculptor Clifford and potters, Glendora and BJ. They are all internationally known artists who have contributed immeasurably to the Native art scene in New Mexico and the Southwest.straditional pottery for over 25 years, beginning at a time wh