Kee is Hopi and Navajo… he draws upon these two Southwest Native American cultures to create his designs. 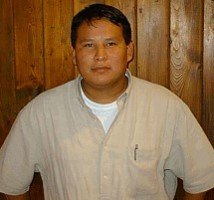 Kee Yazzie, Jr. brings much life experience to his jewelry making, which in turn, gives his jewelry a special depth.  Kee went to school in Provo, Utah where he studied architectural and drafting design – skills that most likely carried over into Kee’s present day jewelry design.  At Brigham Young University, Kee Yazzie studied linguistics until he became fluent in Thai and Laotian, a tool that he used intensively for two years in Boston, Massachusetts and Providence, Rhode Island, where he served as a missionary for the Church of Jesus Christ of Latter-Day Saints.

After returning from his mission work, Kee became interested in jewelry making, for he had long admired the work of American Indian artists like Norbert Peshlakai and Mike Bird-Romero.  Fortunately, Kee was able to learn from his friend, Ray Scott, an artist who Kee Yazzie worked with for a year.  Much of Kee’s metalsmithing talent was, however, developed by trial and error and watching his artist friend’s work.  Kee’s own father was a silversmith too; maybe he inherited some jewelry artist genes.  Kee considers 1995, when he had finally acquired his own jewelry-making tools, to be the true launch of himself as an artist.

“When I returned from school in 1992, I had the desire to learn metalsmithing and, by luck, my friend Ray Scott offered me a job.”  Three years later, Kee won his first award in a juried competition, and is now recognized as one of the most accomplished overlay craftsmen, sometimes incorporating one hundred symbols within a bracelet or pendent. Each intricately hand-cut piece becomes part of a seemingly never-ending mural in silver.

“Mostly, I try to create something that people will like to wear.”