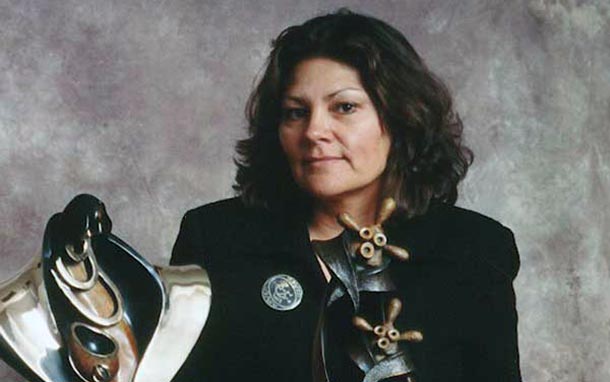 Master artist Kim Obrzut first began producing her iconic Hopi maidens over twenty years ago. Originally working in the traditional scrape-and-smooth method that Hopi potters have used for thousands of years—including her own family ancestors—it wasn’t long before she transitioned into bronze. Employing her degree in Fine Arts from Northern Arizona University, Kim’s career soared alongside a body of work that seeks to preserve the traditions and culture of the Hopi.

When asked about her process, Obrzut says, “I now think back to my childhood and being with my grandfather, and how he was persistent in quality and traditional accuracy in how he carved kachina dolls. . . . These beliefs still influence me today.”

Sitting in her studio, Obrzut once remarked, “After the corn was plenty, the arts were born to the Hopi.” In other words, the Hopi prayed, worked, cared for their family, and then developed the art forms we know today. Her career mirrors this statement; now that her three daughters are nearing adulthood she has more time than ever to devote to her art.

She has been featured in many national magazine articles and her works have been published in various books on Southwest Art. She has won numerous awards in Art and Sculpture shows across the United States in both Native and non-Native events. Obrzut has also had the privilege of being able to serve for two years on the Board of Directors for SWAIA, the organization that runs the Santa Fe Indian Market, the largest American Indian Art show in the United States. Kim Obrzut represents herself with her own website kimobrzut.com. She travels to several art shows across the US each year so she can personally meet her collectors and convey the stories of the Hopi people and her art in person

Kim’s brilliant work can be found in numerous museum collections, corporate collections and private collections all over the world. She is a hugely successful bronze artist—a field typically dominated by men—and she is one of the first Hopis to successfully work in the fine art bronze medium.