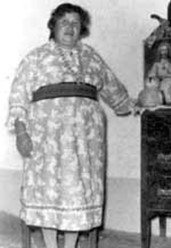 Laurencita R. Herrera, an active potter from the 1920′s to 1980, has been a long-time favorite pottery by collectors – when they can find an example of her work. She always produced excellent pottery during her productive years. She made not only singing mothers, but polychrome jars and bowls as well. She was the mother of Seferina Ortiz and Mary Frances Herrera along with seven other children.  These two sisters are well known to pottery collectors today and have outstanding reputations.  Laurencita is also the great-grandmother of Lisa Holt.

In 1979, The Albuquerque Museum opened an exhibit entitled One Space/Three Visions which was an exhibit of the three cultures of New Mexico—Native American, Hispanic, and European American.  Selected were 286 artists in all mediums—textiles, pottery, jewelry, furniture, wood carvings, and tinwork.  Of these, 193 were Native American artists with 361 items in the exhibit.  Cochiti Pueblo was represented by several potters, including Laurencita Herrera.  It was recognition of her talents to have been selected.  Laurencita Herrera at the time was in her 60s and well established as a potter of note.  She made storyteller figurines and vessels and was considered an artist whose works were to be collected.

In 1920 the first “singing mother” was purchased at Cochiti. It was the figure of a woman holding or carrying one or two children. This was the most popular human form made at Cochiti between 1920-1960. Laurencita Herrera was among only a few women who were making “singing mothers” at that time. Helen Cordero is quoted as saying there was a time when “pottery was silent at Cochiti.” Later during the 1980s, there were approximately 50 potters making storytellers after Helen Cordero made them popular. She said, “Many potters will tell you that their mother or aunt or grandmother ‘made storytellers long ago’”.  In her book, The Pueblo Storyteller, Barbara Babcock says “I have discovered they were referring, not to the storyteller as later conceived and made popular by Helen Cordero, but to this Cochiti tradition of pottery mothers singing to their children” made collectable by Laurencita Herrera”.   According to Barbara Babcock, Laurencita was actively making figures for decades before Helen Cordero’s first storyteller in 1964 (The Pueblo Storyteller, 34).