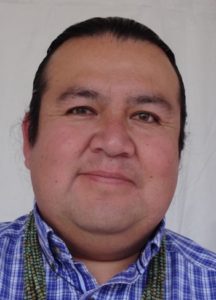 Lester Abeyta lives in Kewa Pueblo—formerly known as Santo Domingo Pueblo– in northern New Mexico. His first teachers of the art of jewelry making were his father, Richard Abeyta, and his mother, Delia Abeyta, both gifted artists themselves. His father learned from his father, Mariano Abeyta, in a tradition that reaches back to prehistoric times, long before the arrival of the Spanish in the Southwest, when Kewa stone and shell jewelry was highly prized and widely traded. Thus Lester Abeyta, whose work appears in many galleries, museums, and private collections across the United States, continues a tradition.

Though part of an ancient tradition, each piece that Lester Abeyta creates is also unique, a product that combines the consummate, stand-out quality of his craftsmanship and his deep, artistic sense of form and color. Each piece explores the possibilities of the natural materials out of which it is made. In order to make the beads for the necklaces, stabilized turquoise, serpentine, pipestone, shell and other materials are sliced, their corners clipped and then are drilled before stringing on a wire. With the materials on the wire, the next step is grinding the pieces in order to shape them into round beads. All of these steps and the final polishing and finishing of the necklaces take a lot of time. The preparation of the materials is a family affair at Lester’s home as he works alongside his father and sister. Lester says working together makes the time more pleasant and is part of their family culture. He also says they will sometimes have friendly ‘competition’ in clipping the materials, a very time consuming and tedious process that goes quicker with the team work. Though his first pieces were made using a traditional pump drill for drilling, sandstone for rolling, and beeswax, tallow, and deer hide for polishing, today he works in a modern shop with electric tools. His necklaces often feature graduated beads ground in such a way that they taper to smaller sizes as they go toward the neck in a simple, elegant design.

He shows regularly at the Santa Fe Indian Market, the Heard Museum of Native Arts Festival, the Indian Arts and Crafts Association show, and the National Museum of the American Indian. His work has won numerous awards  at these events.