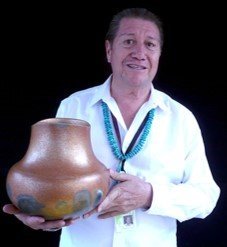 “There is a collaboration between the clay and myself – the clay tells me what direction to take… And I follow the techniques of my ancestors.”

Lonnie Vigil is a micaceous potter. This style of pottery is distinguished by the sparkling mica flecks in the clay and by its traditional use for cooking and storage. Vigil had no conscious desire to become an artist when he was growing up at Nambe Pueblo. Instead, after earning a degree in business administration from Eastern New Mexico University, he pursued a career as a financial and business consultant in New Mexico and subsequently in Washington, D.C. By the early 1980s, Vigil was becoming aware that his work and life in Washington “gave me nothing to feed my soul.” A performance at the Kennedy Center called “Night of the First Americans” inspired Vigil to return to Nambe, where he began working with clay.

He takes classic ceramic techniques and refines them to push the medium beyond the expected norms. He works primarily in micaceous clay, which is characterized by its sparkling mica flecks, using Nambe clay and slip and traditional outdoor firing techniques. He hand-gathers the clay for each of his pieces, adding sand to make it workable.

His artworks reflect the style of his ancestors- handbuilt forms used for cooking and storage. He attributes his success as an artist to the guidance of his great-grandmother, Perfilia Anaya Pena, and great-aunts, who are also potters.  For him, each instance of making a pot is an encounter with Earth Mother and with his Nambe pueblo ancestors who worked the clay before him. He believes that each pot “speaks to the continuity in the identity of family and community,” but is simultaneously an act of connection between the potter, Earth Mother, and the ancestral spirits that guide them.

Vigil, whose pots have won the top awards at several Santa Fe Indian Markets, sees himself as guardian of the clay” and says, “I feel responsible for making sure that the Clay Mother stays alive in my village.”  Lonnie has been credited with single-handedly reviving unpainted, micaceous pottery, and establishing it as a contemporary art form.