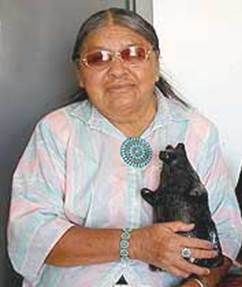 Louise Rose Goodman (LRG) is a Navajo folk artist and ceramicist and a member of the Biih Bitoodnii (Deer Spring) clan who learned pottery making from her sister-in-law, Lorena Bartlett. Her range of work includes standard jars and bowls produced in a wide variety of shapes including a significant amount of animal forms such as bears, chickens, rams, and other domestic and wild creatures.

When the demand for functional works decreased in the 1980s, Goodman turned to animal figures. Her stylized bears are notable for their small heads and legs and substantial bodies, as well as surface textures that mimic a bear’s thick fur. The choice of the bear reflects the important role this animal has played in the lives of the Navajo. The bear has been a key source of food and of materials for clothing, shelter, and ceremonial objects over the years.  They are also important as emblems of power and plenitude.