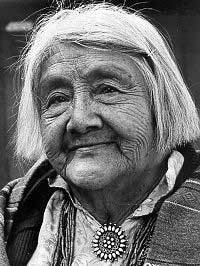 Lucy Martin Lewis is known for her black-on-white decorative ceramics made using traditional techniques. Lewis began making pottery at age eight, after studying with her great aunt. She spent nearly all her life atop the high mesa of Acoma never attending school or learning to speak English.

She is credited with helping revive black on white pottery designs inspired by the ancient pot sherds she saw littering the mesa where she lived. She followed pueblo tradition in every step of pottery production—offering prayers of thanks to Mother Earth for the clay, taking only as much clay as she needed, working the clay with only her hands, forming the vessel from coils of clay, scraping the walls with tools fashioned from gourds, painting the vessel with slips and paints made from clay and vegetal sources and, finally, firing the finished pieces in an outdoor handmade kiln.

She worked professionally from about 1920 until 1990, achieving wide recognition for her work by the 1940’s although she did not start signing her work until around 1950 when she started entering competitions. Lucy Lewis was one of the most widely respected potters from her pueblo and is considered the last of the Acoma matriarchs. Lucy Martin Lewis passed away on March 12, 1992 at a supposed age of 93.