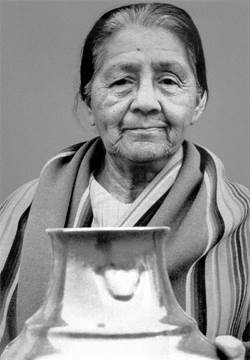 Maria Margarita “Margaret” Tafoya was her given name, but her Tewa name was “Corn Blossom”. Margaret Tafoya, the matriarch of Santa Clara Pueblo potters,  learned the art of making pottery from her parents Sara Fina Tafoya (1863–1949) and Jose Geronimo Tafoya (1863–1955). Sara Fina was considered the leading potter of Santa Clara in her day, the master of making exceptionally large, finely polished black ware. Margaret’s father was primarily concerned with raising food for the family, but he was also known to help Sara Fina with many aspects of her pottery production.

In 1924, Margaret married Alcario Tafoya, and they worked together making pottery just as her mother and father had done–digging and preparing the clay and the firing of the pots. The tradition of creating pottery by using the coil method is over 1200 hundred years old and it has continued through the family even today.

In the early years of the 1900s, Margaret shared her polishing techniques with Maria Martinez of San Ildefonzo, as well as a method of firing any clay to turn it black by simply smothering the fire with manure eliminating the oxygen.

Margaret excelled at making exceptionally large pots, with finely polished surfaces and simple carved designs. Her “bear paw” motif (she considered it good luck) and the deeply carved pueblo symbols like the Avanyu (water serpent) and kiva steps around the shoulder of her jars have become signature trademarks of the Tafoya family pottery. The bear paw design on her jars is an ancient design used by several of the Rio Grande Pueblos. According to Santa Clara tradition, a female bear brought their ancestors to the banks of the Rio Grande River, where the Pueblo is now located. Hence the bear paw design. She believed the secret to her technique were her polishing stones, which have been passed down through the generations- her daughter Toni Roller – uses her mother’s polishing stones even now. Her grandsons, Jeff Roller and  Cliff Roller, also continues the family tradition of making beautiful pottery. Her great grandchildren are also winning awards for their traditional pottery.

By the 1960s Margaret’s pottery had become famous. She received the Best of Show Award in 1978 and 1979 at the Santa Fe Indian Market. In 1984, the National Endowment for the Arts awarded her a National Heritage Fellowship in recognition of her accomplishments. In 1985, Margaret Tafoya was one of three New Mexicans selected to receive the Governor’s Award, New Mexico’s highest artistic honor, awarded for a major contribution to the arts of New Mexico. . In 1992 she received the Lifetime Achievement Award from the national Women’s Caucus for Art. Her pottery is found  in museums and galleries around the world.

Margaret’s daughter, Toni Roller, told the Albuquerque Journal during an interview that even in her later years (Margaret died at 97 in 2001) she would attend the annual Santa Fe Indian Market.

“People would come from all over the world,” Roller said. “They’d bring their Margaret Tafoya pots and have their picture taken with her. … She’d be in her best ceremonial dress and she’d ride up on one of the grandson’s cars, and people would gather around and take pictures and applaud. It was like watching a movie star arrive at a premiere.”