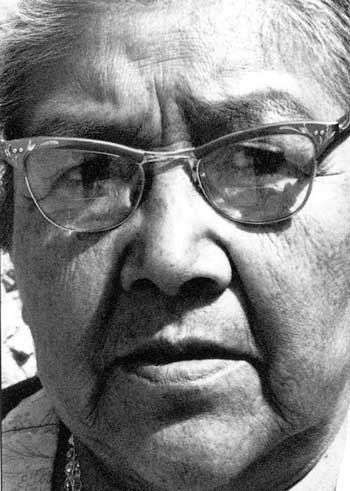 Marie Zieu Chino  was a Native American potter from Acoma Pueblo, and recognized as one of the three most important Acoma potters during the 1950s. The inspirations for many designs used on her pottery were found on old potsherds gathered to use for temper which led to the revival of ancient pottery forms and designs.

In 1922, Chino won her first award at the Santa Fe Indian Market at the age of fifteen. She went on to receive numerous awards for her pottery from 1970-1982. In 1998 the Southwestern Association for Indian Arts recognized her with a “Lifetime Achievement Award.” Marie Z Chino became particularly well known for her fine-line black-on-white pottery and vases with the step design. Her pots were distinctive in their complex geometric designs as well as the combination of life forms and abstract symbols. Some of her favorite designs include: Mimbres animals, Tularosa swirls, Acoma parrots, rainbows, bushes with berries, leaves, rain, clouds, lightning and fine-line snowflakes.

When Chino traveled to the Indian art shows or the Indian Market in Santa Fe, she often took her family with her meeting people from around the world who loved to collect their pottery. This instilled a sense of pride and unity throughout the Chino family. Marie’s daughters Carie, Grace and Rose, as well as her descendants have carried on the tradition of making fine Acoma pottery.