Maxine Toya loves the feel of clay: “It is so alive and it wants to speak through me.” 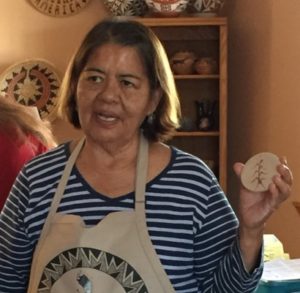 The daughter of famous Jemez potter Marie G. Romero, Maxine grew up surrounded by some of the most accomplished of today’s Jemez potters. Among the potters in her family: Laura Gachupin, Persingula Gachupin, Bertha Gachupin, Virginia Fragua and now, Maxine’s daughters Camilla and Dominique. Maxine has been producing pottery since she was 20 years old and over the years has won numerous 1st, 2nd and 3rd Place ribbons in shows at the Eiteljorg Museum of American Indians and Western Art in Indianapolis and the SWAIA Santa Fe Indian Market. She has also earned awards for Best in Pottery Division and for Most Creative Design. Her most recent award is first place for her pottery at the 2012 Santa Fe Indian Market Days. She is one of the finest Jemez potters and is best known for her matte polychrome and polished red ware storytellers, and her Corn maidens. She also enjoyed a distinguished career as an educator in the BIF Indian Education System, from which she recently retired. She enjoys teaching the traditions passed down to her from her ancestors to the younger generations, so that the legacy of her people will be continued for centuries to come

Maxine R. Toya, “New Snow”, is a member of the Corn Clan. Maxine began drawing and painting at the age of 5, and began working with clay in 1971. Her mother, along with other family members, encouraged and inspired her to learn the art of the long lived tradition of working with clay, using ancient methods in the process.

Maxine specializes in hand coiled clay sculptures of various contemporary pueblo people images. She gathers her clay from within the hills of the Jemez Pueblo. Then she soaks the clay, sifts it for impurities, hand mixes, hand coils, hand shapes, and sands the clay. She hand paints using natural pigments to make the colors, fires the sculptures outdoors, with cedar wood, and stone polishes the final product.

Every piece of art she creates is symbolic and unique in her eyes. She strives to achieve simplicity and elegance in her sculptures. Her favorite shapes to make are clay sculptures, large singular figures known for their elegance of form and finish. A combination of matte paints and polished slips is used on her figures, giving them a very finished appearance. Maxine’s figures are among the most sought-after and the most difficult to obtain.

Although she says she got inspiration from her mother and from the works of other potters, Maxine states that Apache sculptor Allan Houser also provided inspiration to her beautiful pieces of pottery. She signs her sculptures: Maxine Toya, Jemez, followed by the corn symbol to denote her clan origin.

“I have a hard time parting with my pieces; it’s part of me that’s going, too. Whatever you have put into that piece has helped make you a better person. When you are done and you hold it in your hands, to me, it comes alive.”