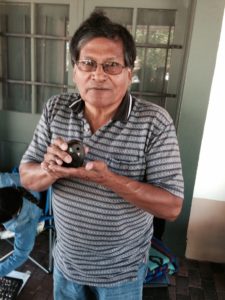 Merton and Linda Sisneros are a married couple, each with a long heritage of pottery in the family. Together they carry on family traditions, and include the family crest (a triangle to symbolize three generations of potting) on their pottery. The couple does a few of the traditional carved pots, but mostly makes painted black on black and red on red pots and figures. They are one of only a few potters in Santa Clara who continue to make the black on black pottery in the traditional manner.

Merton Sisneros has won many awards for workmanship and is well known throughout New Mexico. He makes owls and includes a story about each of the owls he makes.

“All birds are messengers; the owl is a messenger also. The owl is my medicine, also known as the Night Eagle. The owl sits in the East, waiting for the morning light. Owl is a symbol for wisdom; the owl can see that which others cannot, which is the true essence of wisdom. Owl medicine beings further enlightenment to one’s keen insights and abilities that one will not be deceived.

Feathers of birds are very important to all Native American people. Birds are messengers, usually to the Great Spirit. When feathers are used, the emotional commitment is great to the believer. Feathers are used only for the acknowledgement of the message to the Spirit and their world. Thus, life is lived in the use of the feather. Warriors are given eagle feathers to reward their bravery and courage in battle as well as community service by and for the people. The feather is given with prayer by the elders and society leaders of the tribe. The number of feathers received by one is the ultimate acknowledgement of a rewarding life of a people. Thus, the harmony of life is shown rather than spoken. Truly, one has earned his feathers along life’s journey of many daily challenges.

The owl too was a young bird, which with the challenges of the land, lived to be an elder owl only through good choices of life. We, as a people, must make good choices in our lifetime for the betterment of all people.”