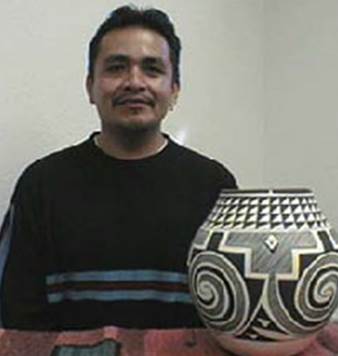 Myron Sarracino, “Kaa Ooa Dinn Naa”, began hand coiling pottery in 1984 at the age of 17. He  was inspired to continue the long  tradition of hand coiling pottery by Verna Soloman (friend), Thelma and Sandy Sarracino (grandparents), and his friend and teacher, the famous, “Gladys Paquin”.  She taught him all the fundamentals of traditional pottery making, which he incorporated into his own – specialized hand coiled traditional pottery with prehistoric swirl patterns and very fine line work to recreate the ancient designs found on old broken pottery shards in and around the ancient grounds of Laguna Pueblo. Myron, one of the few potters making pottery at Laguna today, uses all natural pigments to create his special high quality pottery. He signs his work “Myron Sarracino, Laguna Pueblo”.

He has won numerous awards among them at Eighth Northern Pueblo Indian Arts and Crafts Show, the New Mexico State Fair, and Gallup Indian Ceremonials. His work is included in Berger and Schiffer’s “Pueblo and Navajo Contemporary Pottery” and Gregory Schaaf’s “Southern Pueblo Pottery: 2000 Artist Biographies”.

Dr. Schaaf states: “Myron branched away from Gladys in style, transcending from 19th century Laguna polychrome types back to ancient Mimbres and Tularosa pottery traditions. He dedicates himself to the study of ancient designs which inspire him to create unique variations….Indian art judges have showered Myron with prize ribbons, including Best of Show and Best in Traditional Pottery. He was barely 21 when he started winning awards.”