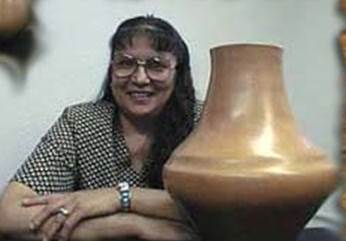 In their book, Southwestern Pottery, Allen Hayes and John Blom state Myrtle Cata’s plain war “in some ways echoes earlier times at San Juan. It’s thin, graceful and undecorated, a result of the ever-escalating sophistication among the best potters from all the pueblos.” (126)

Myrtle Cata is a member of the Turquoise Clan, and is part San Felipe and part San Juan Ohkey Owingeh Pueblo. She has been hand coiling pottery since 1979. She attended many art classes to learn the art of working with clay. While in school, she developed a friendship with Tina Garcia from the Santa Clara Pueblo. They shared special techniques and learned each other’s methods of working with clay.

Two aspects of her handmade pottery distinguish her work from any other Pueblo pottery artist.  Not having a pottery tradition in her family, Myrtle deeply admires the shimmering hand built vessels produced with the unique micaceous clay of the area.  The vast majority of pottery artists working with this particular clay rely on the mica’s shimmer for producing a finished shine to their work.  Myrtle learned how to create something very unique by taking an  extra step of adding slip and stone polishing her pottery to result in a sparkling, very smooth finish not found in other micaceous pottery.  Famed Nambe potter, Lonnie Vigil, deeply admires this extra step Myrtle takes in the creation of her highly individualized pottery form.

The forms themselves are another special aspect of her pottery.  She gives the traditional olla and wedding vase forms her own smooth interpretation.  The result is unexpected twists to storage vessels and mellow ridges to her pieces.

Myrtle specializes in contemporary hand coiled San Juan style pottery. Her pottery style is simple in appearance. It is thin walled, graceful and undecorated. She cleans, mixes, hand coils, shapes and fires her pottery outdoors. She signs her pottery as: Myrtle Cata, San Juan Pueblo. Myrtle is a very creative artist expanding her creativity in many directions.