The way I do it, is the way I was taught. I give it my all. The piece becomes a part of me and represents who I am.” 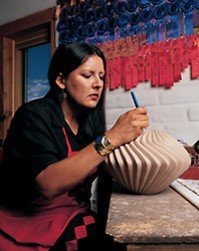 Nancy Youngblood is the granddaughter of Margaret Tafoya and daughter of Mela Youngblood.  She is a master crafts person and certainly one of the most famous potters of today.  Nancy is known for her patience in making the most precise and perfect pottery.  She spares no effort in producing the perfect piece of pottery.

As a child, her military father gave the family a cosmopolitan background by traveling through Europe and living in various places around the world.  She returned to the pueblo at twelve years of age. This was where she began to watch her grandmother work.  This wonderful mentoring was her primary training in what was to become her calling—creating beautiful traditional Santa Clara Pueblo Pottery of the highest quality.

Preparing, polishing and carving a piece is the most difficult. It is during this period that Nancy’s creativity and dedication to perfection shine. Depending on the size of the piece, this process may take anywhere from 50 to 300 hours.

Nancy fires each piece in the traditional way using an open pit that resembles that of a campfire.  In the beginning, she was vulnerable to weather condition. She has now designed and built an enclosed firing house at the pueblo making weather concerns minimal, yet still keeping with tradition. There is always the chance that the item will crack and sometimes explode in the fire.  There are no gauges to use in determining when a pot is ready to remove from the firing process.

Nancy Youngblood has received several hundred awards for her pottery at all the major venues where artists compete.  Her pottery is exhibited in major galleries and museums around the world. Nancy is also a published author.

(Adapted from several sources including nancyyoungbloodinc.com)