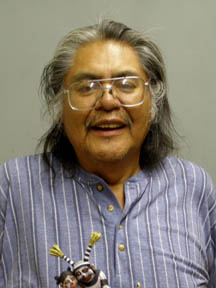 Neil David Sr. was born in 1944 at Tewa Village (Hano) atop First Mesa. He has been an active carver since the 1950s. He resides in Polacca (First Mesa). He was carving kachina dolls before he was ten years old. During his high school years his paintings and sketches were sold through Byron Hunter, who managed McGee’s store in Polacca, Arizona. Neil entered the army and served in Germany during the Vietnam War.  He resides in Polacca, Arizona on the Hopi Indian Reservation and continues to paint and to carve. Neil and his wife Dealva, have three sons and a daughter. Within the David family traditional Hopi values shape and mold every aspect of life. Speaking in their native tongue, the same unwritten history and legends from generations before are preserved. When combined with the visual experiences at hand, a lasting and believing attitude toward the Hopi way is engrained. Neil’s children learn their culture more fully through art influenced by their father’s talent.

He sells his paintings and kachina dolls through art galleries and direct commissions from collectors. Neil’s artistic talents and creativity have brought him international recognition. His dedication and commitment to his heritage is seen in his paintings and carvings. Neil’s co-mingling of art and dedication to his culture gives a rare opportunity to view elements of Hopi life without intruding on the society.