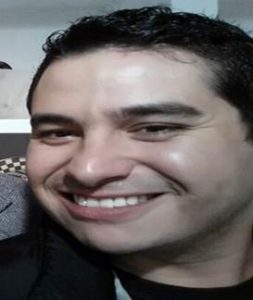 Robert Vigil is one of those rare individuals who walks in both worlds – he says he is 50% Nambe and 50% non-pueblo. H e attended high school in Texas where he first learned to make pottery with clay coils. When he returned to the pueblo, he continued learning from award winning potters such as Virginia Gutierrez, Lonnie Vigil, his cousin, and Juan Tafoya from San Ildefonzo Pueblo. Robert has been an active potter since the 1990s working with micaceous jars, bowls, vases, figures and polished redware. He prefers to work on smaller, more intimate scale and to color his micaceous pots with fire clouds produced by the oxygen reduction method of firing. According to Andre Fisher, “There is an elegant purity to his simplistic and understated forms—a deep reflection of his soft spoken manner and gentle spirit.”

Robert Vigil works in the traditional Nambe way with a micaceous slip, preferring simple shapes and forms.  He gets his inspiration from the clay: “I just sit down and start and the clay forms itself through my hands.”

Robert is known for his quiet ways and has been referred to as “a masterful potter who awaits discovery” by author Gregory Schaaf who adds “his pottery is so thin and light, as to evoke astonishment. Robert does not create giant storage jars like his cousin. Robert works on smaller, more intimate scale. He is soft spoken and humble about his art. His pots are beautiful. We believe his future is bright.”