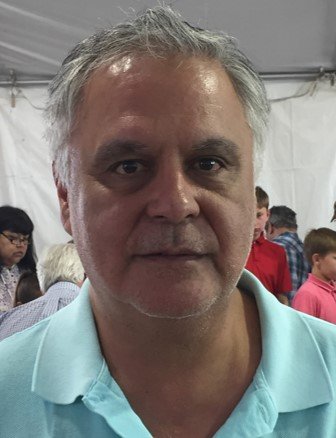 Russell Sanchez has been called one of the most talented, innovative, and respected pottery and clay artists of today, He is often considered a master of combining different techniques to create unique and wonderful pieces of art. His pieces often include deep carvings, high polish, fine etchings, painting, and inset stones or heishi.

One thing Russell does exactly as his ancestors did is burnish his pots with polishing stones. Some of his stones belonged to his grandmother, others to his great-aunt. Different polishing stones are used for different shapes and various areas of the pot. “With stones, the older they are, and the more worn out, the better they get. With new ones we say, in Tewa, it’s like ‘training’ the stone. We start polishing a pot with the new stone and then finish with the old.”

Russell Sanchez has lived his whole life at San Ildefonso Pueblo, where he learned the traditions of pottery making at a very young age. Russell was greatly influenced by his great-aunt, noted potter Rose Gonzales; and he was further encouraged by Dora Tse-Pe.

Sanchez is a perfectionist and will entirely remake a piece he feels does not measure up. This means that sometimes it takes longer to create the perfect pot. Clearly, many believe it’s worth the wait. Since the age of 14, when Sanchez entered his first Santa Fe Indian Market, he has been winning ribbons every time, including most recently at the Phoenix Heard Museum Indian Show.