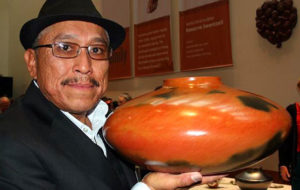 “I build my pots first in my mind,” says Samuel Manymules. In little over one short decade, the pots he envisions have made him the quintessential 21st century Navajo potter and winner of numerous Native American Arts most prestigious awards.

Born on the Navajo reservation of the Bitterwater Clan for the Red Horse Nakai Dine Clan, he grew up in the Navajo way: tending flocks, and working in the cornfields. Along the way he discovered ancient pottery sherds and became fascinated with their shapes and patterns. It is a fascination that lasts to this day. After dabbling in several jobs, including jewelry making, Samuel discovered that creating pottery was to be his avocation.

Long before he sets his hand to clay, Samuel sits and plans. “I spend most of my days envisioning the shapes, planning how to make the vision a reality, and imagining how the completed pot will look.” Only then does he begin to work with the clay.

Using only traditional natural materials, Manymules transforms melon jars into swirling asymmetrical shapes; water jars into swooping, gravity-defying creations; and, into the immediately recognizable faceted pots for which he is renowned. He manipulates traditional shapes into precise architectural angles that only a master potter’s hand could create.

Samuel Manymules unique approach to creating beautiful traditional pieces of art has placed him at the forefront of traditional Navajo pottery. He is one of the most highly collected Navajo potters today. His award winning work marks the continuing movement of Navajo pottery to more sophisticated forms with more refined finishes.