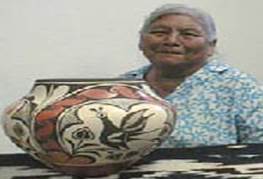 Sofia Pino Medina was trained by her grandmother-in-law, Trinidad Medina, who encouraged her to create in traditional styles and sizes; providing some of the largest Zia vessels in the second-half of the 20th century. Trinidad taught her the fundamentals of pottery making. Sofia began making pottery in 1963 and has become highly respected for her finely made large traditional Zia ollas. She also is well known for her polychrome jars, and also makes dough bowls and chili bowls. The beautiful designs on her pottery usually include some of her favorite things: roadrunners, rainbows, clouds, and kiva steps.

Sofia’s grandmother-in-law encouraged her to continue the family tradition of hand coiling pottery and to pass this tradition on to her daughters and grandchildren. Sofia and her daughter, Lois, often work together creating some of today’s finest Zia pottery. They have won numerous awards at the Santa Fe Indian Market, Eight Northern Arts and Crafts Show. Sofia Medina’s work can be found in the Peabody Museum at Harvard University and the Heard Museum in Phoenix, as well as in several private collections.