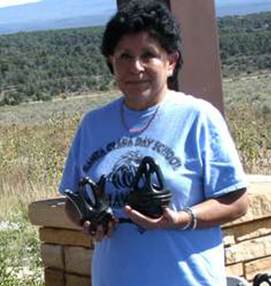 Starr (Pam) Tafoya is the daughter of Henry and Jane Baca. She has been making pottery for over 22 years. She has won first, second and third place ribbons at the Santa Fe Indian Market and The Eight Northern Pueblos Arts and Crafts Show. Starr often worked with her mother, Jane Baca, who taught her the art of making traditional pottery. Together they signed their work “Jane & Starr, Santa Clara Pueblo”. Starr says that carving the pottery is her favorite part of her work. The Tafoya Family of Santa Clara Pueblo has been producing their famous black wear pottery for generations. They use only natural clays and slips found on the pueblo lands.  The polishing stones for their pottery have been passed down through the family for generations. Starr continues to sign her work as: Starr or Jane and Starr, Santa Clara Pueblo.