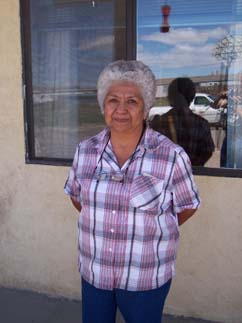 Stella Chavarria is the daughter of famed Santa Clara potter Teresita Naranjo, who passed away in 1999. Chavarria’s pottery is very much influenced by that of her mother, with the exception that she makes only black ware and works on a somewhat smaller scale than did Teresita Naranjo.

Hand coiled and sharply incised pots reflect Chavarria’s years of dedication and experience which began in 1955.  She creates both black-black and carved red ware. Her favorite design is Avanyu.

Chavarria’s work is in every major book published; it has been exhibited in dozens of exhibitions going back to the 1970s and is featured in all the major collections, including the Heard Museum. Of course, she has also won numerous awards for her work at the Santa Fe Indian Market. One could say that Stella makes quintessential Santa Clara pottery and receive little or no argument.

Stella has two potting daughters who share in her style: Denise Chavarria and Sunday Chavarria.