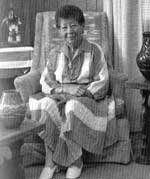 Teresita Tafoya Naranjo was the daughter of Victor and Christina Naranjo and wife of Joe Naranjo, mother to Stella Tafoya Chavarria, niece to Margaret Tafoya, and the granddaughter of Sara Fina Tafoya and Denise Chavarria. After her husband’s passing in 1950, she supported her family solely through sales of her pottery.  She was a master potter-one of the finest of the pueblo and was active from 1935 to 1999.  She was known for her intricately carved blackware and redware in the Santa Clara style.